Ayurveda is the oldest documented medical science going back at least 5000 years. The word Ayurveda comes from Sanskrit words ‘Ayu’ or life and ‘Veda’ meaning knowledge or science. Literally, Ayurveda is the science of life. The founding belief of Ayurveda is that the all things in the universe are made up of the Panchamahabhutas or the 5 core elements – Vayu (Air), Jal (Water), Aakash (Space or ether), Prithvi (Earth) and Tej/Agni (Fire). These core elements form the three basic energies or tridoshas in the human body – vata, pitta and kapha – that govern all the bodily functions. Any imbalance in the tridoshas causes diseases. Ayurveda believes in a holistic manner of natural healing that lays emphasis on healthy dietary & lifestyle choices that suit the ritus/seasons and the doshas for all round wellbeing – of body, mind and soul!

But just having this vast treasure trove of all-inclusive medicinal wisdom is not enough, it has to be made relatable to the young generation and also available to the larger population not just in India but worldwide. With this main objective in mind, in 2016, the Government of India, through the Ministry of Ayush, declared Dhanvantari Jayanti or Dhanteras as the National Ayurveda Day.

According to Hindu tradition, Lord Dhanvantari, who was the physician of the Gods, is considered the father of Ayurveda as he was the first divine incarnation who imparted the medical wisdom of the gods to humans. Considered an avatar of Lord Vishnu, Lord Dhanvantari famously appeared from the ocean during the ‘Samudra Manthan’ or churning of the sea, holding a pot of ‘amrit’ or the elixir of immortality in one hand the sacred text of Ayurveda in the other.

An excellent surgeon, Lord Dhanvantari received the knowledge of Ayurveda directly from Lord Brahma. Dhanvantari Ayurveda was then passed on to his disciples, namely Acharya Sushrut, in the form of shlokas or oral narratives.

Dhanteras, the auspicious day that marks the first day of the Hindu festival of Diwali, is celebrated in worship of Lord Dhanvantari who is the God of good health and Ayurveda and symbolizes cleansing and renewal.

What is the aim of celebrating National Ayurveda Day?

In addition to expanding the reach of Ayurvedic medical wisdom in the country as well as globally, the Ministry of Ayush identified certain other objectives to celebrate National Ayurveda Day

The logo for National Ayurveda Day incorporates the silhouette of Lord Dhanwantari in the centre, the five petals represent Panchamahabhutas and the three circles beneath signify Vata, Pitta and Kapha, the tridoshas or fundamental principles of Ayurveda. An oval leaf encircling the elements depicts the essence of healing through nature, based on these fundamental principles. 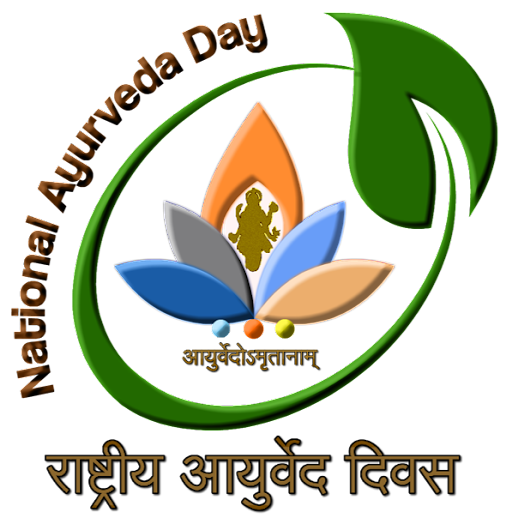 What is the theme of National Ayurveda day 2022?

National Ayurveda Day is being celebrated on 23rd October 2022 is being held under the Azadi Ka Amrit Mahotsav or completion of 75 years of India’s Independence. The theme and celebrations are designed keeping in mind the long-term vision and roadmap for Ayurveda in the year 2047 known as Ayurveda @ 2047.

The theme for National Ayurveda Day 2022 is Har Din, Har Ghar Ayurveda! Meaning Ayurveda every day, Ayurveda in every household.

All India Institute of Ayurveda (AIIA), under the Ministry of Ayush, is the agency that is at the forefront of the celebrations. All ministries and departments of the Government of India are a part of this celebration to drive the effort of reaching the largest populace of the country and making them aware of India’s own rich & traditional medicinal system.

A six-week program launched on 12th September 2022, which will continue till 23rd October, will focus on spreading the message of Ayurveda to all strata of society across the nation.

Thank you. Your comment will be visible after an approval.

Ayurveda, the oldest known traditional medicine system, views health on a holistic level and believes that the mind, body and soul have to be in harmony for all round wellbeing. Ayurveda has long advocated the use of plants as natural remedies for various ailments. Ancient Ayurvedic texts such as Charak…

After a longish monsoon, winter is around the corner – Hemant ritu begins on Sharad Purnima (in early November) and goes on for two months. It is a time when the earth cools down, energizing & rejuvenating the surroundings. As per Ayurveda, any change in ritu should also bring about…

You've probably heard of prediabetes. It is a condition in which blood sugar levels are higher than usual but not yet high enough to be diagnosed as diabetes. Prediabetes still warrants medical attention despite your blood sugar levels being less dangerous. That's because it can increase your risk for type…